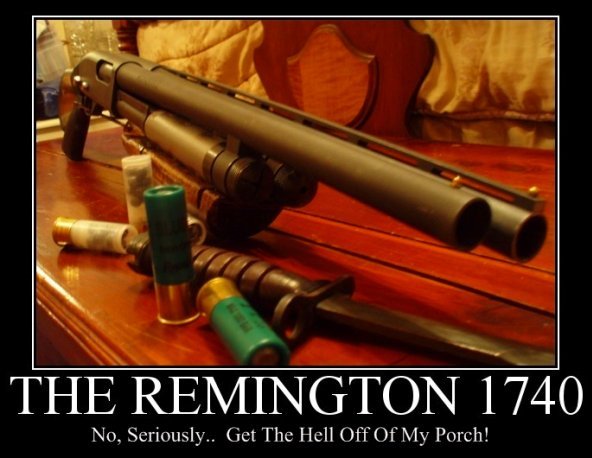 Derived from 4 Remington 870, two sets of a left and a right ejecting shotgun bolted together side by side, and the other one bolted on top of another upside down, with all triggers and stocks unified as well as given with a custom unified receiver. When an average shotgun is not enough, nor the R1740, the engineers of the dead zone offers the R3480 4-barreled pump shotgun, ensuring every blast is a blast.

Burst Count: 4 (Firing all barrels in sequence instead)

Burst Delay: 1s (The actual pump, and a little bit of rest from the powerful recoil)

I actually think that Marion's Trident is losing to other shotguns because of firing speed but i still love it. But being in a higher level, it has been replaced with faster firing shotguns like Chainsaw Shotgun, DRS-12, and Saiga-12 and with a higher DPS naturally it is logical to go for it. I wanted a pump shotgun that is very powerful, because i don't need so much speed in shooting with the shotgun. I honestly didn't like the new auto-shotguns Con introduced. But for a much sensible person; not wanting to fire 4 rounds in a single squeeze, i offered another stats that allows it to have a 4-rd burst instead.

This idea is just very simple, bolt a left-ejecting and right-ejecting R870 shotgun together, then make another one. And the bolt  the other one upside down on the other one; centralizing the shots much more. And the shells will just eject on the side after firing. The engineers can just open the reciever and replace the trigger mechanism and unify them in a single trigger, single handle single stock. But another configuration; simmilar to clockwork that allows them to shoot the separate barrels one by one, allowing a 4-rd shotgun burst.

While it is a shoulder-breaking shotgun, they could have a modified stock; that when the trigger is squeezed, the stock unlocks and allows it to be collapsed with a spring inside.

Anyways, bottom line is, i just gave this idea because i think that Marion's Trident is becoming useless.

So what you're saying is that you have a second Remington 1740 mounted on the first one but flipped upside down? How are you going to link the triggers and shoulder the weapon? It's also going to be nigh-on impossible to aim, reload and hold the weapon.

Yes. Gears; you can remove the triggers and replace them with a single longer shaft shared by the two (Left and right ejection R870), that has gears on it on the outside and just centralize everything, stock, pistol grip.You can aim it like a normal shotgun, you can hold the Marion's Trident right? But shown on the video on the other page, that they can handle the R1740, so just add an another R1740 upside down, modify the trigger and everything else that you hold it with, and you have an R3480.

If you want faster reload, you can just modify the gun to feed on magazines, or you can mod it to be able to remove the tubular magazine and replace it with a fresh one. Or, you can just suck it up and reload each tube separately, like what you are doing with the Trident.

So you'll combine a dual Remington 1740, the other one is upside down, and how are you gonna pump the shotgun on top? Through hands or mechanical stuff?

So you'll combine a dual Remington 1740, the other one is upside down, and how are you gonna pump the shotgun on top? Through hands or mechanical stuff?

You pump manually, but all pumps of the 4 R870s are connected together by any means; i was thinking a modified square stock, so you only need 4 pump to rechamber all.

The shell ejection is the same where you insert it; basically in the middle so it's ambidextrous. But it's gonna make the gun wider, but still the

Trident is just as wide.

Basically the trident; but the two shotguns on the side is now pairs; two R870 Left and Right ejection port bolted upside down together, and bolted to the center Ithaca 37. Thus-ly, 5 barreled shotgun.

Reload Speed: 6s (Because you ARE reloading all 5 shotguns separately each tube)

Burst Count: 5 (Firing all barrels in sequence instead)

Burst Delay: 2s (The actual pump, and a little bit of rest from the powerful recoil)