Weapon/gear Ideas For The Expansion Update

Rhino Revolver: The new level 55-60 pistol, it would be an AE-50 or R-500 on a stupid amount of steroids. Would feature great accuracy and damage with a somewhat sluggish rate of fire and average reload and range.

KS-23: A very powerful, pump action shotgun that would be the new level 55-60 shotgun. It would feature a smallish mag size of only 4 rounds but would have easily the highest damage of most, if not all shotguns in the game. It'd have an average reload speed, range, and fire rate, with decent accuracy.

Banshee Sword: An upgraded version of the Tac Blade with increased knock back and aps while keeping only slightly increased aps. This weapon would be a bit better at dealing with higher damage/health infected but it wouldn't have that great damage per hit. Instead, its aps and increased knockback would be its main qualities.

Survival Hammer: A modern, black survival/tactical hammer with average damage but higher aps than normal for a blunt weapon. It'd still feature good knockback, but with slightly less damage than on average for higher end blunt weapons (higher than the Banshee Sword though).

I would have added more, but many of the level 51-55 weapons still compete (like the tmp and such) so ye

Quiver: Would increase the capacity of bows by 5 (default) and would add a small reload bonus and other small arrow related bonuses. When a bow has a quiver it acts pretty much like a normal firearm, only this time the aim time is the actual "reload" time between arrows within a quiver, and the actual reload time is the act of filling the quiver with new arrows or whatever.

Would have added more but I believe the new armors cover a pretty decent area.

Active Gear : Decoy grenade (a grenade attach with noise maker with the ability to attract zombies and kill

zombies in it's range)

An abandoned prototype from Heckler & Koch for the defunct Close Assault Weapon System, this shotgun was taken by HERC and redesigned so that it would be useful in the unique combat situations within the Dead Zone. It features a slightly higher damage output than other shotguns, but with a much larger effective range and improved reload speed.

Developed for the US Special Operations Command, this is a purely offensive pistol that features a silencer and LAM (the latter being only for aesthetics in-game). It is somewhat heavy and cumbersome to fire, but it makes it up for its ability to shoot .45 ACP +P ammunition, which concedes a decent damage paired with a reasonable capacity of 12 rounds.

One thing that would stand out about this pistol is that it will always have a silencer, which means that the "Quiet" and "Suppressed" would not be available for it, giving more chances for more useful prefixes to appear (such as Sighted or Skilled). 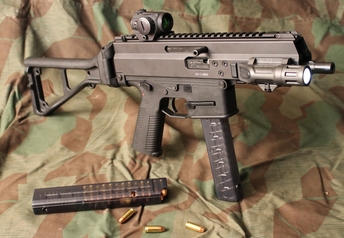 Since HERC usually gets the best equipment, it's no surprise that they chose this weapon to equip their soldiers for close-quarters combat. Firing the .45 ACP rounds with a decent stopping power, light and compact frame and the typical Swiss quality, it's a great choice for any firearms professional.

In the case of an operator trapped within a building, HERC has provided a collapsible and light (yet very strong) Halligan bar to quickly breach doors and other entry/exit points, which can double as a last-resource defensive weapon against the infected, its high knockback and decent APS keeping them at bay long enough to find an exit. Of course, it would have a great damage versus buildings, since it's the main function of this tool.

**Note: I like the one in the image, but it lacks the crowbar-like ending most Halligan bars have.

damn these are all better ideas than mine XD

I'd like it if you gave a rough idea of stats and such for your weapon suggestions, similar to what Lana did, just helps out con and gives him better ideas.

Definitely some nice suggestions so far!

Back to Ideas
Reply to quoted posts     Clear