166 replies to this topic

I can't wait to see all of these

awesome cant wait to see these new changes for 2018

The 2018 Roadmap looks interesting and i have a few question for Con,

1.Will the horizon expand in this year?

2.Will some new weapons come out this year?

I don't know about the Horizon, but we will surely have new weapons (they were mentioned in the "Convicts & Criminals" and "HERC bunkers" sections, plus the traditional event weapons).

I actually really like the idea of boosters as active gear. I don't play much anymore but I will enjoy testing it out.

Looks promising. New HERC BodyArmors to be permanent? Or Event only?

The booster active gear sounds like it would give attackers an insane advantage. After the first smoke activates, one could have 3 or 4 of their survivors take one safely, and then rek the defenders when the smoke clears.

What kind of raiding weapons will come from bunkers and the criminal set?

Will Kong get the 6 year anniversary stuff or will it just be AG like the winter event free package? apparently they got 100 fuel for valentines day too lol.

For fuel trading why not just make the mk1,2,3,4 boxes permanent? but less common as they dropped very often during the christmas event, was crazy lol

bossfighter7
Looks like a awesome year for the game. Can't wait.

Rather than adding another currency in terms of tradeable fuel, why not just drop premium boxes that give only fuel in a fixed amount? That would allow you to sell the same premium cards as before and also control how much fixed tradeable fuel there was using the boxes. If you wanted, you could also sell more boxes seperately.

If you allow people to buy trade - fuel directly you create an alternate currency system competing with the premium and L3 keys people have been using since the game started. It's going to end up devaluing the keys people have already accumulated. Prems and Keys give highly variable rewards. If you compare that to a fixed value currency, the interest in prem cards is going to crash. I know, for example, if I had a choice of buying prem cards or fuel as a trade currency, I'd never buy another prem card and likely would never accept one in trade or use them ever again.

It seems like a great way to anger anyone that has been spending money in prems or trading in them.

It's not like the Christmas box drops. I farmed those hard and there was still a reasonably low absolute limit to the number you could find in a month. Plus the amount of fuel in them was pretty small and trading them in groups cost a significant amount both ways. As a result, I bought some fuel but not a lot. Even then, it was pretty clear that a handful of boxes with a fixed amount of fuel were far more valuable to people than a key.

Still waiting for the new melee weapons from last year.  Hopefully they will come soon.

Still waiting for the new melee weapons from last year.  Hopefully they will come soon.

Do you mean these? 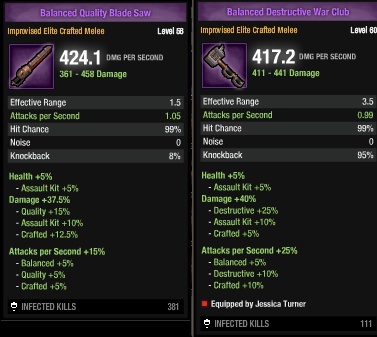 Luisssboom
Looking forward to this XD. So much more excitement and hype than waiting for university decisions XD.

So leveling after cap is not on list now? Sad.

GREAT well done this will refresh the game a bit

we hope these event continue every month

Looking forward to the new active gear. As a pve player I never use grenades.

does this mean that there will finally be a better quality of the raider vest ?

Back to Announcements
Reply to quoted posts     Clear