85 replies to this topic 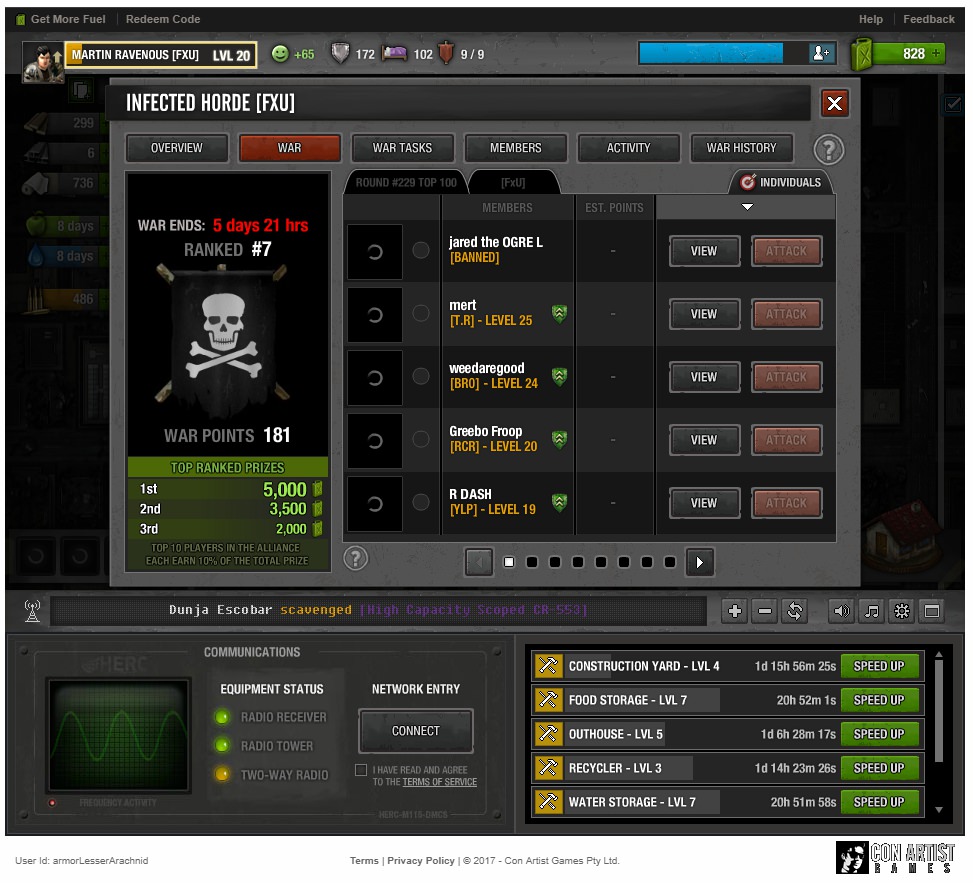 Glitch still seems to be happening this war, would like to know how you're coming along guys

My opinion would be to return  to the former way of finding targets,   Since targets are getting scarcer and scarcer,  it may be a good time to include all targets on everyones list instead of having the game decide for you.    This may also boost raiding numbers as many don't raid because there is not much to raid out there.     Just an idea.    Thanks for listening.    MOSES

Posting for a teammate:

what about for con to remove the part of the code where the target list include banned players, this will force the IA to add more attackable players which could be actual targets.

some players are still struggling to get even 1 target to raid to appear on their war targets list--any updates about this problem?

not really sure what happened to targets on some accounts a few weeks ago. But clearly theres some error or bug right now.

OK all, just an idea, I've been looking and it is possible there simply is nobody in your level range that is not WF. need to look and see how many people are in alliances. it looks like the game is dying. you have legion and feared, that is it. it's the same small group who keep the top spots on lockdown. no one else can compete, so everyone not part of that clique has quit the game. the war targets problem is, no targets. nobody to target. can't have a war when there is only 1 alliance.

if this was the case, the targets would have slowly gotten less over time.

But they just dropped to basically only 20s, or no targets at all from one round to the next for a lot of people, when the round before there were plenty of 80+ targets

Con, this bug is legit and it's costing you money to not fix it in a timely way. Some of your whales that buy fuel to burn regularly simply cannot raid due to lack of targets.

well you wanted this. Pages and pages of protected and banned people. Think you have details now.

will not let me post screen shot says to big

After 2 long weeks, I finally got my first target today, when I reached level 23. Perhaps this bug has something to do with level? I'm not sure, but I sure as heck am grateful for my first target in weeks.

I must say even the attachment option on this platform is buggy. It says upload max of 5kb - I've jumped through hoops to resize the screenshot to 4.6kb and it still won't go through! Anyway, my list now contains only protected or banned accounts - just a day earlier I can still find 20 and the occasional 40 point target. I won't buy any more fuel for any of my accounts if this goes on, so frustrating!

PS If you're planning to let the game die, please do tell it to your users straight instead of this long slow decay. I've been supporting this game for more than 4 years now and this is not the way to treat a customer.

The solution might be to open up the old target system where we could get targets off the compound list. I know Con has said they want to do away with that system, OKAY, but your new system does not work. Restore the old system until you figure out how to fix the new one?

Please Help My Targets Are Gone!

I burn easily 6-8K fuel each war round speeding up return times.

No targets means no burnt fuel.

Con, just want to make sure you know this: The bug does not affect level 55-60 targets. There must be some difference in how a level 60 player acquires targets compared to the lower levels.

Yes again another war with no targets.  So no burned fuel.

Really sorry this didn't get followed up on.

Thanks all for the info you've shared. Will get back to you all shortly.

I have a level 54 account and like Jo I have only the same 20 point compound to raid that has no flag.

My level 40 account only has 20 point targets when 1-2 weeks ago there were occasional 80 pointers available.

I play on AG only not Face Book.

Maxx, can I get the UserID's for the account in question.

Back to Reports
Reply to quoted posts     Clear