But First: What Makes a LR the "Worst"

Of course, the term "worse" is subjective, so I'll share my reasoning first.

We all know the "4/4" used to label the most desired qualities of a weapon, specifically a long rifle: range, damage, APS and suppression. For those, generally the most important one is the range, followed by APS or damage, and at last suppression as a plus. On the contrary, the least desired aspects of a long rifle are usually the capacity, hit chance, reload speed and noise; the first three add what most players now as "fake DPS", while noise reduces suppression and, in almost all cases, the weapon with noise reduction will be rangeless. Most long rifles also have a move speed reduction, but that one is hardly variable for each type.

Following this, the worst long rifle of each kind should have the following:

-The lowest possible amount of damage and APS.

-The presence of "fake DPS" traits or move speed reduction is not taken into account to declare it "the worst", but it should have the least possible total amount of bonuses.

This would mean that generally those rifles derived from the High Capacity Scoped variant should be the worst, provided they only have hit chance and capacity as bonuses (plus move speed reduction where it applies). However, not all long rifles have this variant because they are always scoped, so some of them will have to have at least a small amount of damage or APS. Those rifles are:

In those cases I've selected the 27.5% APS bonus as the worst possible case.

Is the Collection Really Complete?

Due to its nature, as long as there is chance to have new long rifles it will never be fully complete. However, there are certain aspects that are not fulfilled even with the present lineup:

-There are certain glitched versions of some of the "always scoped" long rifles that allow them to have no damage or APS at all. Those rifles are the M107-CQ, VS-121 and MSR-82; I only own the glitched MSR version, so the VS and M107 are not truly the worst possible, only the worst possible without glitch.

-The Long Pistol has a High Capacity Scoped variant, so it's theoretically possible to obtain one without any APS, but due the rarity of the weapon itself it's unlikely that I will find worse, so I'm taking the 27.5% APS version as the worst for now, and will revise it if a worse one comes out.

-Aubrey Dickinson has confirmed here that a unique version of the Van Buren exists, but I have never seen one. For now I'm considering the collection complete without it, and will revise it if any Van Buren comes out.

Of course, if anyone have a worse version, any of the missing glitched ones or something else to add or correct to what I said, feel free to look me up here or in the AG trade channel.

With all being said, here it is: 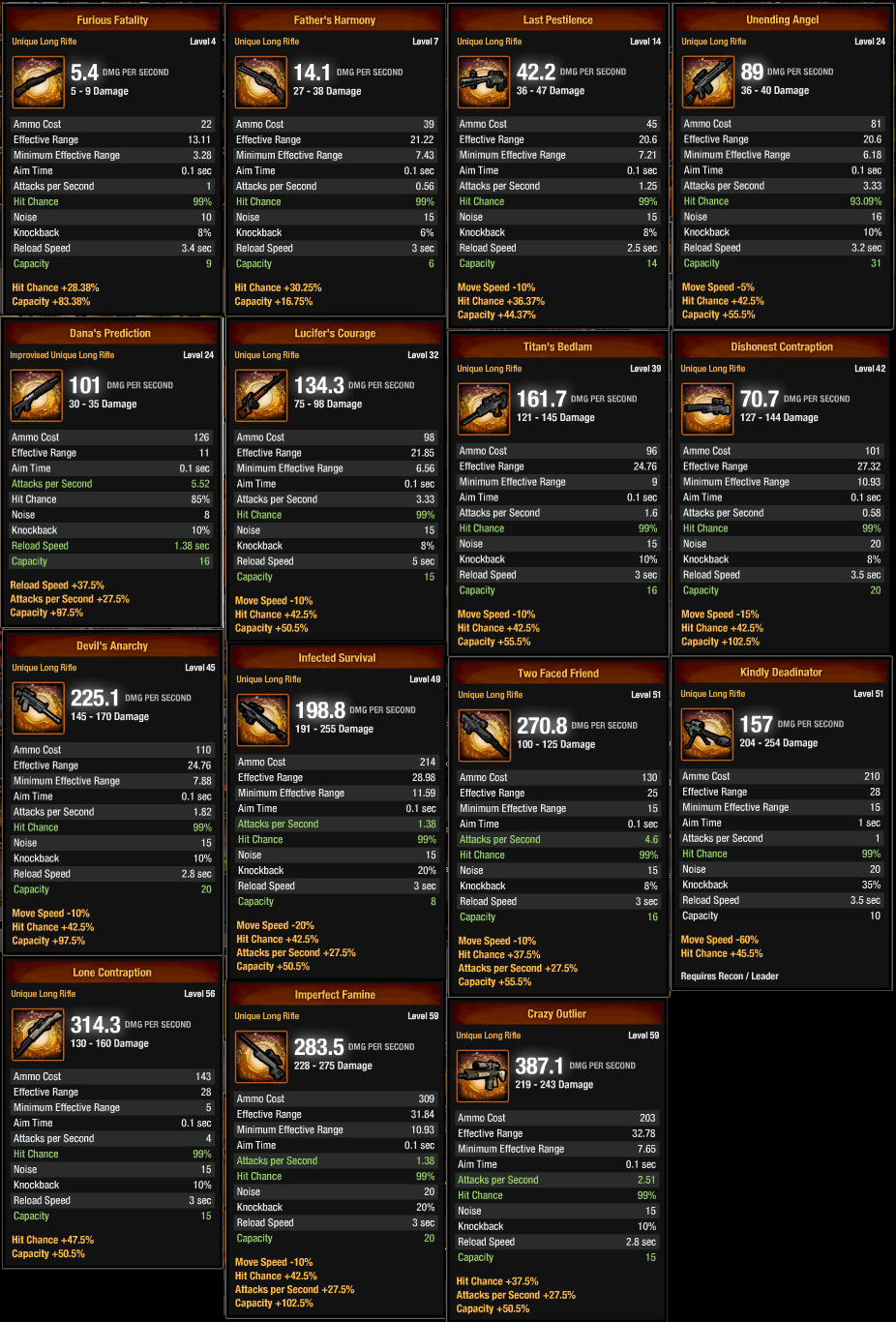 Well congrats on completing your collection

Lana Woo
I've never seen one, but if someone has one please let me know so I can start looking for it.

I've never seen one, but if someone has one please let me know so I can start looking for it.

Also tagged with one or more of these keywords: long rifle, worst, unique, collection