2 replies to this topic

In the South Harbor East area, specifically at the west military base in which the length of the base runs North to South, I have noticed that any infected riot zombies that are eliminated are not counting towards my bounty.  This has occurred more than once.  I am not positive if the pattern involves the first time I go to that area to start the bounty for that area.  I do know that this has happened before involving riot infected in different areas and different locations, such as a large park in Meadow View.  This occurred this morning around 5:15 am CST.

Apparently, some Riot zombies on the 50+ areas are actually HERC Riot zombies, and they don't count towards any IB counter (probably as an oversight from the programmers). These HERC Riots can be distinguished by having a greenish armor, and all running riots and many walking riots are of the HERC variety: 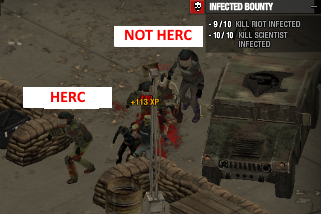 I really hope this get fixed, along with the 45-50 areas still  showing up in level 60 bounties.

I was initially caught out by the two types of Riot, HERC Riot & Regular Riot,

my rule of thumb is if he's running he's prolly a HERC Riot and won't count towards the bounty, the colour difference is subtle, more obvious on the legs, the blood smears show up better on the lighter green HERC Riot,

I agree with Lana, the point that the bounties seem to diversify into a wider level distribution (Leader reaching Lvl 45?) could do with a change, up to then the bounty is always the area of your leaders level and the levels just below,

this would only need be lifted to Lvl 50 to make sure all eligible survivors were still getting XP and would, during infected bounties, corral the player within the expansion areas & Green Plains/Waterside, Uptown is Lvl 49.

Back to Reports
Reply to quoted posts     Clear